Talented conductor Honna Tetsuji, who has conducted many concerts of Vietnam National Symphony Orchestra VNSO will conduct this night.

Here about Hanoi New Music Ensemble, the first professional group of contemporary music in Vietnam, with the goal of performing the best New music in Vietnam and Internationally.
Composer Vu Nhat Tan is art director and violinist Pham Truong Son is executive director.
Hanoi New Music Ensemble has performed at the Vietnam National Academy of Music in Hanoi, the Manzi Art Space, the French Cultural Institute in Hanoi-L’Espace and the Goethe-Institut. Members of the group include professional music lecturers and teachers, who are professors at the Vietnam National Academy of Music or performing in the Vietnam National Orchestra.

Works in the show also include:
FIEBERPHANTASIE (Fantasy fever)
In “Fieberphantasie” from 1999, Jörg Widmann studied the melody of Robert Schumann. He described it as a kind of “fever curve”: “suspense, flickering, steaming” with “a myriad of smaller and bigger wave crests in the big lines”. Symbols include performance points, not containing a specific sound level, but with detailed presentation instructions.
Jörg Widmann (* 1973) is one of the most interesting and versatile artists and composers of his generation …

QUATUOR POUR LA FIN DU TEMPS “Quartet for the end of the age”, the content of the work is also about the end of the world. French composer Olivier Messian finished his work with a total of eight sentences as a prisoner in a prisoner of war camp in Görlitz in Germany …

HANOISE (Hanoi Sound)
Famous composer Vu Nhat Tan extracts and condenses the sounds of the Vietnamese capital into a contemporary musical art work. In cooperation with the Goethe-Institut, Vu Nhat Tan will introduce a new piece written specifically for the string group of Hanoi New Music Ensemble entitled HANOISE (Hanoi Sound). This is an extremely valuable contribution to the treasure of contemporary art in Vietnam. As the name of the work, “Hanoi Sound” reflects the city’s unique atmosphere and mix of colorful sounds: A cultural meeting between East and West through contemporary music.

Mukang Fields returns with some cosmic funky space jazz at Urban Gentry on the 27th, along with some great art and photography and other musicians performing too (including a set by one of the OG experimental musicians of the Hanoi scene Vu Nhat Tan). Join us for the opening night of ‘Cities In Transition’, a joint art exhibition featuring works by William P. Badger, Jr. (paintings and drawings) and Wouter Vanhees (photography). William’s work incorporates images from his time in Vietnam he sees as fleeting amid the coming industrialization of things. Wouter’s work focuses on life at street level amid the rising cities of Vietnam.
Live music by:
6pm Opening, with music by Paolo Chiabrando
8pm Mukang Fields (first set)
9pm Vu Nhat Tan
10pm Mukang Fields (second set)
—
Link
https://www.facebook.com/events/2201122396664598/?active_tab=about

Heritage Space, re-locating to a new ‘planet’, night after night, has been preparing a tiny ‘feast’, for our new housewarming, a tiny house but sweet and dreamy (and not far, not far at all, anymore). Great gratefulness to all the South-to-North artists that gather here to take us to the moon.
We would love to invite all the old and new friends to join our language – music – movement feast: “Heritage ÉP launch: Tìm em/Qua đêm trăng sạch” (Seeking for you/Through a clear moon night). And this time, it’s gonna be a much more familiar and fun performing atmosphere.
List of main performances:
#0: Tìm em/ Qua thư viện sạch… (Seeking for you/Through a clean library…)
#1: Cánh đồng, con ngựa, chuyến tàu (The field, the horse, the train) – an experimental musical translation of the same poem – đàn tranh duo, vocal, sound objects,.. [with: Hoài Anh + Hà Thuý Hằng]
#2: Jờ Joạcx – bamboo flute, jew harp, electronic instruments and movements on “music pallete” – a special interactive D.I.Y ‘instrument’ invented by Alec Schachner [with: Alec Schachner + Duy Rùa + Kim]
#3: Hanoise – field recording, synthersizer, percussion. A project of Vu Nhat Tan, in duo with Ngo Tra My dan Bau and voice
—
Link
https://www.facebook.com/events/387520025268511/

New Music is rooted in history and the customs of the people where it comes from. New music from Vietnam reflects sacrifice, faith and aspirations of the people of Vietnam. Delivering this message is a challenging ambition yet justifiable and necessary. This is our statement of beliefs as the Hanoi New Music Ensemble

Grammy Award winning conductor Jeff von der Schmidt returns to conduct the Hanoi New Music Ensemble in a concert of three generations of Vietnamese new music. The concert opens with “JIJI” by Luong Hue Trinh, welcoming her back to Hanoi after completing her studies in Hamburg, Germany. JIJI is dedicated to her teacher Georg Hadju and uses ancient dan tranh with instruments and technology. “TUYEN LUA” by Nguyen Thien Dao is from the war years of 1968 and then the iron horse victory of Vietnamese boy hero Phu Dong. The concert ends with the world premiere of “METAL WATER FIRE” with the poetry of Nguyen Duy and music of Vu Nhat Tan, combining soloist Tran Thu Thuy with Hanoi New Music Ensemble and Dong Kinh Co Nhac the Ancient Music Group of Tonkin. This concert also begins a regional collaboration between Hanoi New Music Ensemble and the HongKong New Music Ensemble with players Karina Yau and Chronicle Li coming to Hanoi from Hong Kong

1,000 Dragons Rising: In the Path of the Ancestors Triumph for the Hà Nội New Music Ensemble

As a way of expression and cognition, music is a universal language to mankind. Each ethnic group, through its long history of formation and development, has created their own music with distinctive features and characteristics.
“Shades of the Sounds’ is a program combining contemporary music through the works by composer Vu Nhat Tan and Hát Tuồng – Vietnamese traditional music.
With the criterion “to sing as to behold”, Hát Tuồng is a captivating art form, its distinct vocal and performance techniques immerse the audience into different emotional states.
The concert is a journey into the sound of music of the Past and Present.

live videos from the concert 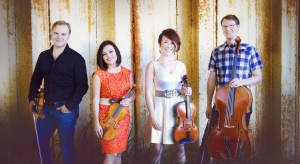 “Night Rain” comes to Hà Nội, the next program of the Hà Nội New Music Ensemble!
Schoenberg‘s ”Transfigured Night” receives its Vietnamese premiere, a big step forward for my hardworking friends. I’m happy Ngo Tra My will perform a work written for her by Nguyễn Thiên Đạo, the Xenakis of Asia.
Technology guru Vũ Nhật Tân will have two works on the program. The Vietnamese understand family better than anything – I’ve tagged our friends in Schoenberg‘s family, so from Los Angeles to Vienna to Hà Nội to Venice best wishes all around!